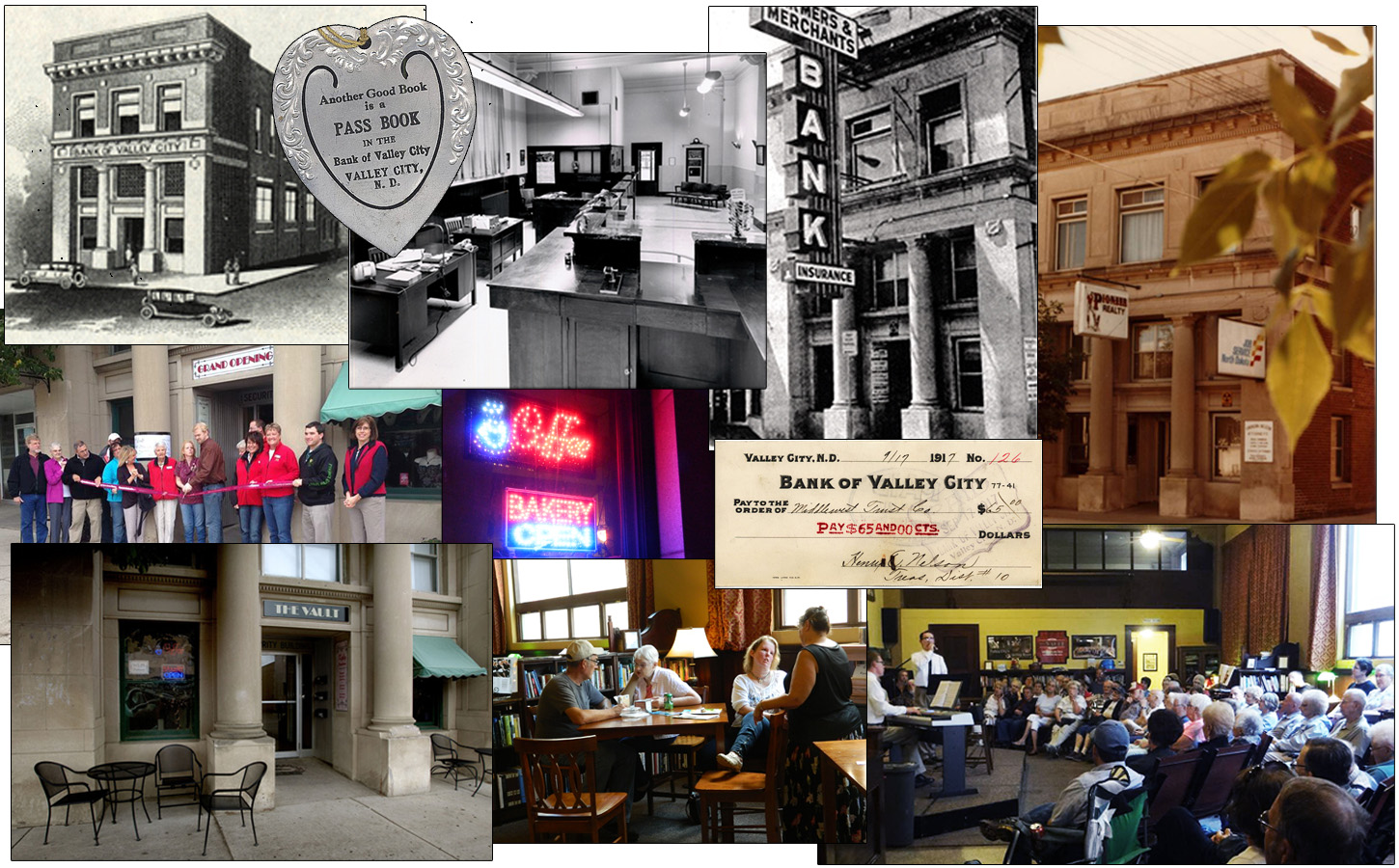 The Stavanger Building was originally built in 1920 as The Bank of Valley City. It later became Fidelity Building and Loan Association, then Farmers and Merchant Bank, then an office building. After lying vacant for several years it was purchased by Paul Stenshoel. The roof was leaking, parts of the ceiling had collapsed. There were holes in walls and floors from unfinished projects. The great hall was windowless, the massive North windows having been bricked over many years before. Renovations in the 70s had destroyed much of the original woodwork, marble and crown moldings.

In 2008 I (David Brekke) met Paul Stenshoel. Paul and I shared a joy for renovation and an appreciation for grassroots reform. Paul had renovated the upstairs from a rubble strewn shell to usable studios and beautiful living spaces, an amazing transformation.

Paul gave the Stavanger Building great room to me with the understanding that I would take on his vision of it being a coffee shop of some sort. Paul and I agreed on a general floor plan and began renovations in 2009. The great hall had damage to the ceiling and walls in several places including a two foot hole in the crown molding, a four foot hole in one of the pillars, and a missing capital. The great hall needed new bathrooms, ceiling lights, doors, window replacement, floor repair, carpeting, emergency lighting, a stage, etc.

In total it took Paul and I, three and a half years to turn the space into a historically styled, usable coffee shop. The renovation of the coffee shop and building as a whole is ongoing. We repeat the mantra, “We’ll never be done…what’s next?”

The Self-Serve business model was my idea. People have asked where I got the idea from. I wanted to do something which would best serve the community and draw attention to this wonderful town – this was more successful then I could have imagined. (see Press)

The renovation of the commercial kitchen.

Paul and I share a philosophy of community enhancement coined by Paul as “Stone Soup” after the Old World tale by the same name. Essentially Stone Soup entails taking your time and building enthusiasm for a project that will eventually pay off by making the community a better place to live. The ultimate goal is not to rebuild a building but to build up the community. In the spirit of this, for over a decade, Paul has put the money earned from the building right back into renovating the building. This kind of dedication to community enhancement has built a wide base of Stavanger Building supporters who have donated their time, talents and possessions to furthering the project.

The windows had been broken, bricked over and drywalled.

I would like to thank Paul Stenshoel for making all of this possible by donating money from the Stavanger Building fund, for jack hammering a 1000 holes where holes were needed, and for supporting this project every step of the way.

Very special thanks to Donna Reign, her brother Dean, her children Josh and Caleb and Donna’s many friends (pastors, youth pastors, and especially Dan) for pitching in when many hands were needed.

Also special thanks to ACE Hardware – Larry Lindeman & Al Lindeman, R. J. Plumbing, Schuberts Carpet One, Hi Line Electric, and ASAP Electric for going above and beyond.  As well as Shawn McMahon, Scott Paulson, Jim Poehls and Damon Bong for being available at just the right moments. And to all the people who have offered chairs, wood, plaster, speakers, and words of encouragement…thank you everyone.